The RCGI – Research Centre for Gas Innovation appears as a world center for advanced studies of the sustainable use of natural gas, biogas, hydrogen and management, transport and storage of CO2 emissions. The center, based at the University of São Paulo, is the result of FAPESP partnerships in support of high-level scientific research for the development of the energy sector. Its activities are based on three pillars: research, innovation and diffusion of knowledge. The RCGI brings together a team of researchers from various fields of science and technology for the development of the gas and energy industries. The projects are structured in three research programmes: Engineering, Physical Chemistry and Energy Policies & Economics. With the integration of researchers and the complementarity of their programmes, the RCGI offers innovative solutions to the technological problems related to natural gas, biogas, hydrogen and CO2 emissions as well as providing support for the improvement of energy policies in the State of São Paulo, in Brazil and worldwide. In particular, it intends to increase the competitiveness of the industry of São Paulo and inform society of the enormous economic potential in the use of natural gas, biogas and hydrogen as sources of energy in the years to come.The RCGI is grateful to the generous support of the founder sponsors: FAPESP and Shell.

The scope of the project is to analyze the legal and regulatory frameworks applied to the natural gas sector in Brazil, considering specifically the State of São Paulo, as well as assess the consequences of the various gas schemes at the State level. The project aims to organize a Centre that aggregates legal, political and regulatory aspects of the natural gas. In addition to the compilation of Federal and State legislation (specifically of São Paulo State), the Centre also aims to encourage comments and discussions among the leading experts on natural gas in Brazil.

Cátedra do Gas, research and development project of the Institute for Energy and Environment (IEE), USP 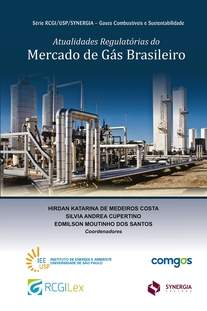 Buy The year 2017 is without a doubt memorable. The Petroleum Law completes 20 years of promulgation and together brings important reflection on the role of Petrobras in the oil and gas sector in face of its divestment plan. The Gas Law is eight years old and, in parallel, the Federal Government carries out the 'Gas to Grow' initiative with the participation of the various agents of the sector. We can therefore see a boil of possible proposals to change these norms in the face of current contributions and discussions. Throughout the book it was possible to verify the changes that have occurred in the national gas industry since the edition of the Petroleum Law, which took place in 1997, and also the promulgation of the Gas Law in 2009. Since then, gas in Brazil has taken on significant proportions due to the growing demand in recent years, although we are still far from desirable in terms of comprehensive gas use and at competitive prices. In addition, the pre-salt production expectation, although it has not yet had accurate data, can increase the supply of this energy, which has been pointed as a transition fuel for a world with a predominance of renewable energy sources. Thus, this book, as a collective work, presents analyzes related to the natural gas market in Brazil in its various stages. It was developed by researchers from the Institute of Energy and Environment of the University of São Paulo (IEE / USP) and the Fapesp Shell Research Center for Gas Innovation (RCGI), based in USP. The result of a partnership between the Foundation for Research Support of the State of São Paulo (FAPESP) and Shell, RCGI promotes high-level scientific research for the development of the energy sector. to provide readers with an overview of the problem addressed, with clearly delineated objectives and regulatory developments especially based on the 'Gas for Growth' initiative. The pioneering of this work certainly brings the public the possibility of having didactic access to the topic, which has been the subject of debates since mid-2016 and will continue in the agenda of the sector in the months that follow, since the Ministry of Mines and Energy has announced possible draft bill to be sent to the Executive Branch and, consequently, to the Legislative Branch. In addition, the chapters approached in a didactic way the various norms issued by the National Agency of Petroleum, Natural Gas and Biofuels (ANP) and The capitular structure of the book was intended to go through the gas value chain historically, not forgetting the technical, regulatory and economic aspects peculiar to the network industry. The first chapter was devoted to the constitutional aspects related to the theme. The second chapter presented the legislative evolution and detailed the context of the 'Gas to Grow' initiative. The third chapter brought the relevance of the understanding of infrastructure sharing, such as those related to gas processing, to the expansion of competition in the sector. Chapter four included topics pertaining to gas transportation, and the fifth explored both taxes and government participation. Chapters six and seven addressed issues of environmental optics and unconventional gas. The last chapters focus on challenges with concrete case perspectives. In this line, the eighth chapter analyzed the free market of the case and its regulation in the Brazilian States and within the federal legislation. The chapters nine and ten counted on the participation of authors from the Institute of Economy of the Federal University of Rio de January, demonstrating the rich interaction between universities and research groups. And, chapter eleven concludes by comparing the regulatory history of the gas industry of the United States and Brazil. The book is therefore an important scientific contribution to the gas sector, serving as a foundation for the future that follows , since the discussions of the 'Gás para Crescer' initiative will certainly proceed to spheres of the legislative process with the introduction of important normative modifications. Thus, the unbiased contributions of the academy in the reflection on the subject bring the enrichment of informative and analytical content for the continuity of the debate and for confronting issues that are still obstacles to the broad development of the gas market in Brazil. The present book, therefore, more than unpublished, is current, and serves as a base for the reflections that will follow in Brazil over time.

A regulatory overview of the Brazilian Natural Gas Market

According to the national Gas Law (2009), natural gas is defined by 'any hydrocarbon that remains in gaseous state under normal atmospheric conditions, produced directly from petroleum or gas reservoirs, whose composition may contain wet, dry and residual gases.' Furthermore, natural gas is composed mainly by methane (CH4), around 90%, and ethane (C2H6), around 10%. In addition, there are other components like hydrogen sulfide (H2S), carbon dioxide (CO2), nitrogen, helium and heavier fractions of hydrocarbons, which count for small fractions of the average overall composition of the natural gas...